Below is an account of the international trip Restore physiotherapist Joel Ames undertook with Melbourne Football Club player Christian Petracca. Christian was the number 2 pick in the 2014 AFL Draft. Unfortunately, Christian suffered a season ending knee injury in February 2015. 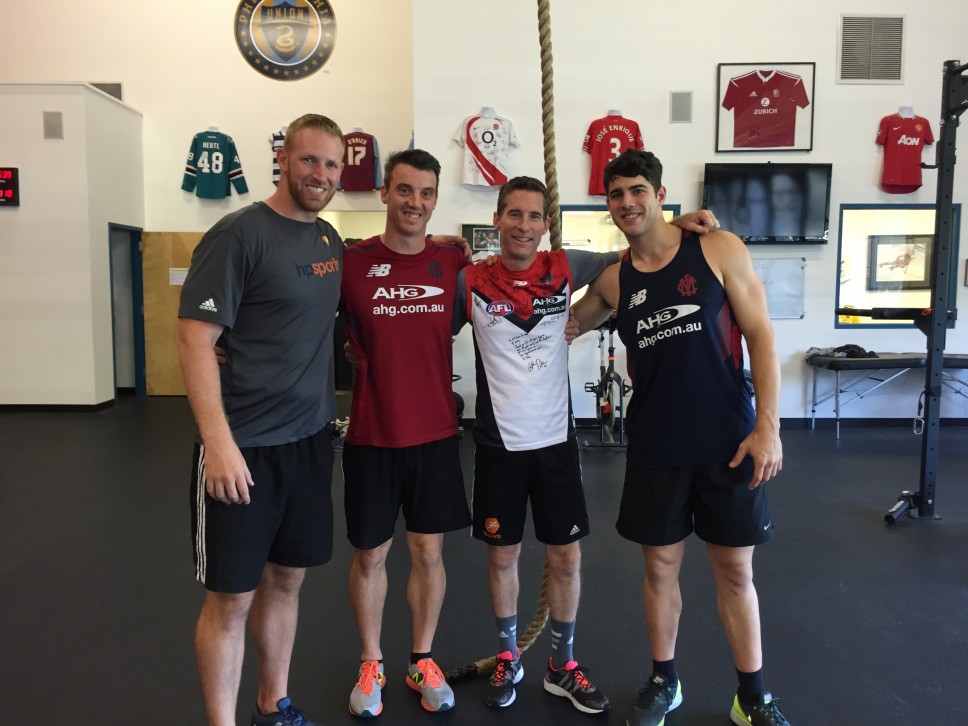 Melbourne to Sydney. Sydney to Dallas. Dallas to Philadelphia.

After leaving Melbourne at 10.30am we arrive at our hotel at 11.00pm Saturday night Philly time. After 26.5 hours, 3 flights and 4 airports we are absolutely exhausted and need sleep!!!

Breakfast is followed by a quick run and kick in Valley Creek Park to blow out some cobwebs and stretch some pretty tight muscles after yesterday’s travel. On return to the hotel we complete a recovery session in the pool.

The rest of the day is spent shopping for food and learning the road rules, driving on the opposite side of the road has its challenges. Sunday is NFL (American Football) Day in the US, we have arrived Week 1 of the 2015/16 season and everybody over here is going nuts for the start of the season. TV is wall-to-wall NFL.

Day one with Bill Knowles at his training facility Hp Sports. The facility is amazing indoor soccer field, gymnastics floor, trampolines, ice baths, pools etc. First session starts at 8am, with an introduction to Bill, his team and his philosophies. Bill is an energetic and enthusiastic American who clearly loves his job of training athletes.

Christian undertakes a series of drills and exercises for an hour working on stability and tension through his body. We then have 2.5hours till our next session, which allows us to have lunch. Another 2-hour session follows in the afternoon building on the exercises and techniques from this morning. Christian is exhausted by the end, his glutes and calves burning as they get hammered in the session.

The rest of the afternoon is about recovery ice baths, pool recovery and stretching. Dinner is followed by physiotherapy treatment for Christian, this is going to be a huge part of the week to ensure Christian can get up for 10 sessions in five days.

Another day, another early rise. Although for me this was earlier than expected. Still suffering the effects of jet lag and woke up at 4am, unable to get back to sleep.

First session today, built on the drill work we did yesterday, Christian is picking things up really quickly and progressing well. Been some solid leg work over the past two days and his glutes, quads and calves are getting fatigued.

Also training at Hp Sports with Bill this week are two professional Rugby Union players from the UK who have also suffered ACL injuries. Talking to their physiotherapist gives me a great opportunity to learn about treating athletes in a different environment and country. Again one of the benefits of this great experience.

The afternoon session focuses solely on upper body and core, giving the legs a much needed rest. Ice bath and recovery follow. Both of us a pretty cooked in the 28-degree heat – not used to this coming off a cold Melbourne winter. Physiotherapy again follows that evening in preparation for the day ahead.

The third day in a row and Christian is starting to feel the effects of the back-to-back sessions. Today focused on reinforcing the drills learnt from the past two days. We also introduce balancing exercises using water bags, which add a variable load to his knee.

The afternoon session was conducted in the pool, and was a chance to unload Christian’s legs and work his core.

Later in the day we had some down time to explore Philly. We had a Philly Cheesesteak – basically a heart attack in a bun!!! We also checked out a baseball game; Philadelphia Phillies vs. Washington Nationals. The Phillies have been struggling for the entire season and this continued last night with the Phillies going down 12 to 2. Despite this it was another great American experience.

Solid two sessions today. The morning session was all about quick feet work on the gymnastics floor. This floor enables the athlete to get more elevation and spring, which is great for plyometric/explosive work. The afternoon session was about gymnastics which Christian found fun, fun, fun. Forward and backward rolls, over pommels, cartwheels and the odd tackle bag thrown in. Although enjoyable all these exercises had a purpose – putting Christian in positions where he needs to develop speed and power quickly.

Another physio arrived today to observe Bill at work, Remi, who works with the UK National Rugby Union team. Remi worked in the past with Geelong Football Club in the AFL. Again it was great to share thoughts and experiences from other physio working in the elite sporting environment.

One day to go.

Last day of the training camp. Christian is starting to get physically and mentally fatigued. It has been a very intense week, requiring not only large physical efforts, but also a lot of concentration and mental application.

The morning was spent applying the movement patterns and principles, we had learnt over the past 4 days, to the field. This included a lot of acceleration/deceleration drills, agility and change of direction. It was great to see the progression from what Christian learnt on Monday and how it was applied to increasingly difficult tasks.

The afternoon was spent doing numerous squatting, hopping and jumping activities against resistance bands. By the end Christian almost collapsed in a heap from fatigue.

The evening was spent out for dinner and a couple of drinks with the team at Hp Sports and the professional rugby players and their physios. Another great opportunity to swap stories, compare codes and share information. Not too mention the pulled pork and ribs!

This was a fantastic experience. Providing a great insight into how the Americans train their athletes. Also some great learning about exercises and drills for athletes recovering from major knee injuries. The camp also highlighted the importance of coaching and skill acquisition in a rehabilitation setting. The experience also provided me with the opportunity to learn from one of the world leading experts in ACL rehabilitation and reconditioning, Bill Knowles.

This whole experience has certainly enhanced my own skills set as a physiotherapist. Skills, that I will be able to implement and apply to my Restore Physiotherapy and Pilates patients on my return to Australia.

Joel Ames is a director at Restore Physiotherapy & Pilates. He has worked as a physiotherapist at the Melbourne Football Club for the past three seasons. His current role is fulltime with game day responsibilities as well as responsibility for providing physiotherapist management of injured players in the rehabilitation program.